A (more than) quarterly update…

Four months, a third of a year, much too long to leave a blog un-updated…

During that time, the second anniversary of my brother’s death has come and gone, and with it the deadline to complete my 52 Firsts. It become quite apparent, as July 12 edged closer, that I was not going to fit everything in. But it didn’t bother me too much, I thought I would just carry on going until I got to 52, no matter how long it took me.

On the 14 July 2013, I ran my 10k. Well, I ran most of it and walked a few 100m. The weather was blazing hot and my knee started twinging somewhere just after the 5k mark but I still managed to complete it in the respectable time of 1 hour, 2 mins and 38 secs. Not quite within the hour I had wanted but still not bad for a first attempt.


After it was all over, I felt a massive amount of relief and pride. But then this soon gave way to a feeling of emptiness. It took quite a few weeks of reflection for me to actually pick myself up again and start living life with a positive focus, rather than just seeing the depressing side to everything.


But I am well and truly there now. Life is a positive experience and there is so much you can take from just living your day to day life.

So that is probably the biggest thing that has happened to me in the last few months. But here is an update on what else has been going on…

I was the third highest fundraiser for CALM in the London 10k – I cannot say thank you enough to everybody that sponsored me and supported me (it was amazing to have my family there cheering me on). And, despite raising over £1000 for CALM, I was still surprised when I got a letter personally thanking me for my efforts, along with a voucher for cocktails for me and five friends as a thank you. I think I can safely cross the ‘Do something big…’ first off of my list.

I test drove a car… and bought it – Test driving a car has been on my list since the beginning and I wasn’t sure it was something I was going to feel comfortable doing, since I hadn’t had much driving experience since passing my test 3 years ago. But I did it… twice. And bought the second car. Another first for me! 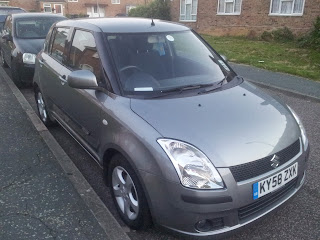 Create your own street art – A quick trip to Hobbycraft for some inspiration and I created this little fella, who may (or may not, if you are a law enforcement agency) have found a home on a wall somewhere in Harlow. 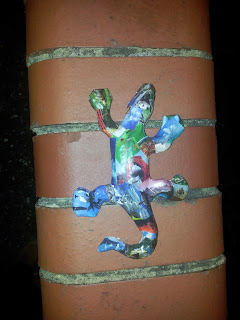 I also managed to get myself on a TV show (without even really thinking about it being a first I could tick off my list). Check out how impressed I look at Dom Joly racing a Greyhound...


I’m sure there are other Firsts I've managed to tick off too. I will get to that 52! Even if it takes me until I am that age!
Posted by Emma at 21:34