Cook dinner for my family for one whole week

As you may have noticed, the Hat has been made somewhat redundant for the past few weeks, as opportunities for firsts keep creeping up on me.

Getting ready to move for a new job has meant a couple of other ideas that were already in the Hat have become necessary (or at least much easier) to complete before their time of being picked out.

For example, I don’t think my family would have appreciated me cooking for them quite so much if they had to wait for me to drive the 60-odd miles to Ipswich every night after work before I even turned on the oven. Obviously, I would have had no problem at all with this, but, you know, I’m just selfless, always thinking of others, and we can’t all be like that.

So last week I dusted off my cook books and decided it was time I earned my keep.


I do love cooking for myself. And I love experimenting a little bit (even if it often ends in my having to scrub out pans with bits of food burnt to the bottom or digging into a pot of Ben and Jerry’s afterwards for ‘dessert’ because the main was pretty inedible). But cooking for four was a whole different beast. My three main problems were:

So I decided to stick to fairly easy, simple dishes and routed out a few recipes that I thought everyone would like. Starting with a basic fish pie, with a mashed potato topping. Yummy and just what we needed on the week that mother nature decided to unleash cold, wet and windy weather on us.

Now, it turns out, somebody else in my family doesn’t like fish.

The solution? Individual pie dishes. And some chicken. Not quite sure I’m sold on the idea with chicken and parsley sauce but they ate it.

This idea of individual dinners proved something of a theme throughout the week. For the lovely lemon chicken and rice dish I made, I replaced the rice with chips for those who wanted it (missing out) and picked out all the green beans from the beautifully cheesy and crunchy pasta bake I made (but not the pasta).

Despite the extra effort, I actually quite enjoyed it. Yes, towards the end of the week (and with a monster hangover on the Sunday) I was quick to shout down calls for my to cook again on Monday but, for one week only, it was good to pick new exciting things to cook and I felt like creating a dinner was a productive and rewarding thing to do. For a week.

So, with a Come Dine With Me style scoring system, overall winner of the week was definitely my Guinness and Onion Bangers. The recipe for which can be found below, along with the lemon chicken rice and cheesy Bolognese bake (all serve four, although I had no problems adapting to serve five or six plus a baby).


The Hat will feature again in the near future (there is just one other first that has crept up on me which seemed logical to do at this moment in time). And, as those of you who asked what the green bits were floating in my drink on Saturday will know I have been experimenting to bring you my cocktail very soon.

Heat oil in a large frying pan, add the chicken. Cook until sealed and golden all over and then remove and set aside.

Throw the onion and garlic into the pan using the remaining oil and cook until just beginning to brown (5 mins or so). Sprinkle in curry powder and stir in for a further minute. Then return the chicken to the pan and stir well before removing the pan from the heat.

Melt the butter in a large heavy-based saucepan (with a tight-fitting lid and suitable for placing in the oven) and then throw in the rice. Stir and ensure that all grains of rice are covered in butter and then remove from heat.

Add the lemon slices to the chicken mixture and stir in before spooning the whole mixture on top of the rice. Pour over the stock and add salt and pepper to taste.

Cover with lid and cook in oven for 45 minutes, or until the chicken is thoroughly cooked and rice is tender. To serve, sprinkle with almonds and coriander.Guinness and Onion Bangers 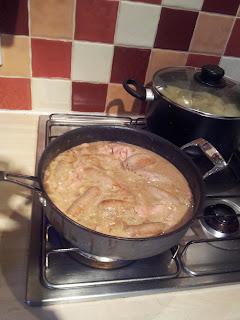 Use an overproof dish on the hob (or just use a frying pan and transfer later if you do not have a suitable dish) to brown the sausages in the olive oil.

Add the onions and cook until soft. Throw in the garlic and bacon and cook for a further 2 mintues.

Stir in the flour, pour in the guiness and let it bubble up. Then add your thyme, cover with a lid and pop it in the oven for 40 minutes (while making up your mash).

Taste it after 40 mins to see if it still has a strong alcoholic taste, in which case leave for up to an hour. Then serve. 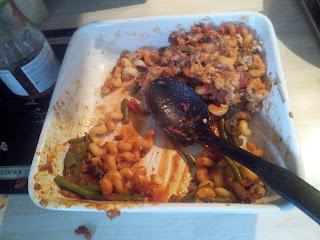 Cook the pasta according to pack instructions, adding the beans for the last 6 minutes and then drain.

At the same time, heat the oil and cook the mince for about 10 minutes until browned and no pink remains. Add garlic, mixed herbs, tomatoes and pasta sauce and cook for a further 3 minutes.


Stir pasta and beans into beef mixture. Transfer to an overproof dish and top with the bread pieces and cheese. Grill until the cheese is all melted and top looks golden.
Posted by Emma at 16:14